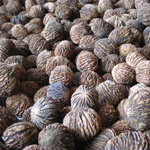 Many people tend to assume that intestinal parasites are a Third World problem, but the truth is that they also affect millions of people in the Western world. In fact, intestinal parasites have risen to epidemic levels in the United States, with an estimated 50 percent of Americans believed to suffer from parasitic organisms in their digestive tract. The most common intestinal parasites in the West include roundworms, pinworms, and the protozoan, G. lamblia, which rob the body of essential nutrients while causing abdominal pain, nausea, gas, fatigue, and other unpleasant conditions.

While we can minimize our risk of contacting intestinal parasites by eating healthier food, avoiding undercooked meat, drinking cleaner water, and living in a less unpolluted environment, these steps will not kill the parasites that still dwell within us. Fortunately, the natural world is packed with a number of remedies that are effective at removing intestinal parasites in a safe and gentle manner.

Diatomaceous earth is arguably the most effective natural anti-parasitic remedy available today. A naturally occurring sedimentary rock that is usually sold in powdered form, diatomaceous earth has a long history of use as a natural insecticide and pesticide. It is believed to work by dehydrating parasites in the intestinal tract, allowing our bodies to excrete them painlessly.

To reap this benefit, take one to two tablespoons of food grade diatomaceous earth powder mixed with eight ounces of purified water daily for seven days. Some people like to begin with smaller amounts of the powder, such as one or two teaspoons, until they feel comfortable taking larger quantities of it. Remember to drink more water than usual during this cleansing program, since diatomaceous earth can dehydrate our bodies as well.

Wormwood is a bitter-tasting plant native to the temperate regions of Northern African and Eurasia. Though it is often grown for ornamental purposes, it is also a potent medicine and has been used for centuries to treat intestinal parasites.

Scientific research into wormwood’s anti-parasitical properties are limited, but it is believed that certain chemical compounds in the plant called sesquiterpene lactones can weaken parasite membranes. Additionally, two chemicals found in wormwood, thujone and isothujone, are known to kill parasites.

Wormwood can be consumed in liquid extract, tea, or capsule form. Its pure oil is considered toxic, however, and should not be ingested.

The hulls of the black walnut tree are another time-honored natural remedy with established anti-parasitical properties, and seem to be particularly effective at killing tapeworms, pinworms, and Candida albicans. This is because the hulls are rich in an active component called juglone, which is an established antibacterial, antiviral, anti-parasitic, and fungicide. Juglone is also known to oxygenate the blood, which helps remove parasites.

Though black walnut hulls are usually consumed in tincture form for parasite removal, the tincture can also be applied topically to treat ringworm and yeast infections of the skin. It is considered safe to consume for up to two weeks at a time, but should be avoided by pregnant women.