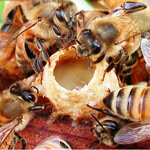 Royal jelly is a substance secreted from the glands of worker bees to feed their larvae and queens. It is thick in texture, milky-white in color, and has been harvested by humans for centuries for its alleged rejuvenating properties. Indeed, it is a fact that queen bees – which are fed royal jelly their entire lives – live approximately 40 times longer than drone or worker bees, largely due to the jelly’s nutritiousness.

Cancer-fighting properties – According to a study published in a 2009 edition of the BMC Complementary and Alternative Medicine, royal jelly fights cancer by suppressing the blood supply to tumors. When the Japanese researchers tested various royal jelly types on umbilical vein tissue cultures, all of them inhibited the formation of blood vessels, especially those richest in caffeic acid, a compound responsible for the greatest suppressive levels. Moreover, since the fatty components of royal jelly contain estrogenic effects – as proved by a study published in the December 2010 edition of PLoS One – it is possible that royal jelly can treat breast and cervical cancer.

Improves blood health – According to a study published in the November 2008 edition of the Biological and Pharmaceutical Bulletin, royal jelly can improve insulin resistance and blood pressure. The researchers at Okayama University in Japan fed the jelly to rats that were suffering from high blood pressure and insulin resistance due to a high-fructose diet. After two months, the rats demonstrated noticeably fewer instances of blood vessel constriction, which resulted in lower triglyceride and insulin levels.

Skin care properties – Although royal jelly is best-known as a health supplement, it is often used in skincare products because it contains DNA and gelatin, two ingredients that aid collagen production (and thus anti-aging activity). For this reason, many people like to apply royal jelly topically and allow it to nourish and invigorate their skin.

Antibacterial components – According to a study published in the July 1990 edition of the Journal of Biological Chemistry, a protein found in royal jelly – unofficially named royalisin – provides numerous antibacterial and antimicrobial properties, and is effective at dealing with certain bacterial cultures at lower levels.

Rich in nutrients – As with other bee products such as bee pollen and propolis, royal jelly’s biggest attraction is probably its impressive concentration of vitamins and minerals. Indeed, an average serving of royal jelly contains seventeen different amino acids (including all eight essential amino acids, making it a complete protein), most of the B vitamins (which are used for the production and synthesis of energy), and respectable levels of iron and calcium, which are essential for superior blood and bone health. Royal jelly also contains vitamins A, C, and E, which are important antioxidants that can neutralize free radical activity, thus guarding us from degenerative diseases.

Infertility treatment – It is not a coincidence that worker bees are infertile, while queen bees can lay up to 2,000 eggs per day throughout their extensive 4 to 6 year lifespan. This is because royal jelly stimulates estrogen production, thereby stabilizing menstrual cycles in women, improving sperm morphology in men, and increasing the libido of both sexes.

Royal jelly is best purchased fresh, since processed forms (such as those found in capsules and extracts) often undergo extensive heating and manufacturing, which are unnatural processes that kill the nutrients and enzymes responsible for providing many of the health benefits listed above. Moreover, royal jelly is known to trigger severe allergic reactions. If you’re allergic to honey or other bee products, it’s likely that you’ll also be allergic to royal jelly, so be careful.